I want to explore how the adiabatic cooling as we move up the atmosphere works with radiant cooling. I hope this post will clarify the concept. However first, the other relevant discussions:

In this first post The CO2 Green-house effect is real (sometimes), I introduced the Advanced Green-House Gas Theory in its simplest form which is a semi-transparent layer in an otherwise transparent atmosphere.

In the second post Reconciling skydragons and mainstream skeptics? , I clarified some points and showed how the Advanced Green-House Theory is compatible with both the Basic Green-House Theory (which is very problematic) and the Skydragon ideas of adiabatic cooling.

Finally there is an excellent discussion at Tallbloke

Before I start, I want to stop arguments of the form “greenhouse warming doesn’t exist because its not what we mean by it”. So instead of the wooly conceptual definition which no one really seems to know what it means, I want to define “green-house warming” in a way that isn’t linked to a particular theory but is a general concept. So, I am defining the Green-House Effect in this quantifiable form:

“The amount the real world is warmer than a theoretical world with no atmosphere.

This should allow us to compare models. For the purposes of this discussion, the Green-House Effect is the explanation of how the atmosphere warms us over what we would expect for a bare earth pseudo-black body type scenario. Obviously it can only be theoretical, because without an atmosphere the ocean will boil.

The other problem is that there are different models of a “bare earth”, possible starting points might be:

Obviously all these have temperature differences, but these should be quantifiable. But the basic single starting point, should be the simplest system which would be (1) above (with a stated emissivity).

“Green-house gases” are assumed to absorb IR and stop it leaving the earth. As such this is largely:

an “earth up” view of the atmosphere.

In this theory the the emission of IR is largely ignored. As such Green-House gases are taken to be a uni-directional conduit, only taking IR energy from the earth into gaseous energy. The temperature of the atmosphere is (wrongly) assumed to be irrelevant in the way the green-house gas works.

The adiabatic expansion causes the atmosphere to cool as we rise and get hotter as pressure increases toward the surface. Because the most significant pathways are those highest in the atmosphere, the apparent temperature of the earth as viewed from space is strongly affected by the temperature at the top of dense layers (like the troposphere) or at opaque cloud layers. As such this is largely an:

A space down view of the atmosphere

Like the Skydragon Theory this includes adiabatic expansion causing the atmosphere to cool as we rise and get hotter as pressure increases toward the surface. But in this theory, green-house gases provide a dual-directional energy pathway between gaseous and radiative energy throughout the atmosphere.

When the most significant pathways are those highest in the atmosphere, the apparent temperature of the earth as viewed from space is strongly affected by the temperature at the top of dense layers (like the troposphere) or at opaque cloud layers. As such this is largely an:

A space down view of the atmosphere

Because the Advanced Green-House Theory assumes green-house gases both emit and absorb, the flow of energy from gas temperature to radiant energy is strongly affected by atmospheric temperature.

And the net effect of green-house gases in the atmosphere which is cooler due to adiabatic cooling, is that there is a lower radiant energy flux out of the planet which is why heat is retained and green-house gases lead to a warmer world. (see start of previous post “why colder is warmer”)

At the heart of the Advanced Green-House Gas theory is a simple concept that a gas allowed to expand cools. This is the same as saying a volume of gas pressurised by the weight of the atmosphere above will heat up (see left). The theory then says that the IR emissions are linked to this atmospheric temperature through the bi-directional conduit provided by green-house gases such as water vapour, CO2 and other conduits like dust and most importantly cloud.

A Virtual Cycle (NOT AIR MOVEMENT!!)

To explain how this cooling of the atmosphere can warm the planet, I would like to take you through a virtual tour as an “observer” moving around the atmosphere with a parcel of air.

Note: this is not (yet) meant to signify convective currents.

So, because the bulk of the radiation is emitted at the top where it is coldest, the more the air column is cooled, the lower the temperature at the point where the IR is emitted, and so the lower the radiant energy outward. Less energy emitted, means more is retained and so that tends to keep us warm.

How do the different theories work with this?

Green-house gases stop radiation escaping and form a blanket. This accounts for the warmer region at the surface and cooler radiation leaving the earth.

The Skydragons focus on the adiabatic cooling. They make the assumtion all radiation is from the top. This explains why the temperature near the ground is cooler and why there is less emissions into space. It does not explain how individual gases interact. 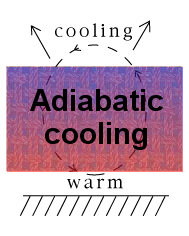 In this theory the green-house gases act as a two way conduit between the adiabatic cooled atmosphere and radiation. It is because this adiabatic cooling is linked to radiation that we have the green-house effect. When the effect is very weak, it is close to the Basic Theory as heat is effectively trapped from the IR as it tries to escape. With a strong green-house effect, IR is trapped in the bulk of the atmosphere [+where the density of greenhouse gases means IR travels only short distances within the gas and so it +]  only escape from the top. Then it becomes the skydragon or adiabatic cooling where the IR is only from the top of the atmosphere.

All these theories are simplifications and like all theories they cannot include all effect. The Basic Green-House Theory explains in the most simple terms of a blanket how green-house gases work, but doesn’t do much else. The Skydragon theory, focusses on the real atmosphere, but it uses a very simple idea for radiation which fails to explain how the adiabatic cooling is linked to the radiative emissions from the earth in the bulk of the atmosphere.