Posted on November 13, 2013 by Scottish Sceptic 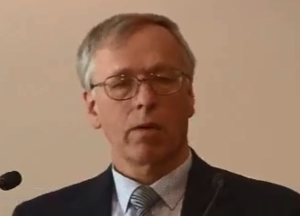 Great news!! Professor Hermann Harde who is a German academic who specialises in gas absorption and thoroughly understands the radiative properties of gases, has used the very latest up to date HITRAN database of gas absorption spectra and discovered that the IPCC have overstated the effect of CO2 by some 30%

“Simulations of the up- and down-welling radiation and its interaction with the most prominent greenhouse gases water vapour, carbon dioxide, methane, and ozone in the atmosphere are presented. The radiative forcing at doubled CO2 concentration is found to be 30% smaller than the IPCC-value.” (Radiation and Heat Transfer in the Atmosphere: A Comprehensive Approach on a Molecular Basis)

Having corresponded with Prof Harde before when the paper was in German, I already knew that his work with the HITRAN 2008 database produced startling different results from the IPCC figures which use earlier versions of the HITRAN database. The big difference is simple: the latest database has more details and allows a more detailed comparison of the effects of gases in the atmosphere.

The simplest way to explain this is to tell you the story of our escaping chickens. We have a chicken run outside. We obtained another batch of chicks from ebay and put them in the run. An hour later they had all escaped. We put them back, blocked checked every possible exit and … and hour later they escaped again. It was not until we saw one escaping that we realised that the mesh that held the big chickens in was too course for the smaller chickens.

This appears to be the problem with earlier HITRAN databases.  Each data “bucket” for radiative absorption is for a wider range of frequencies than the HITRAN 2008 database. The result is that there are fine holes which in effect “let the radiation out”.

The result is that the greenhouse effect of CO2 has been overestimated by 30%.

The problem is that the greenhouse effect has no impact WHAT-SO-EVER on the climate predictions. Because all the modellers do is scale up this effect by whatever they want to make their predictions hindcast the past. So, all this paper can do is cause the modellers to increase their presumed (and false) relationship between CO2 and global temperature and as the 30% decrease in the CO2 greenhouse effect will be exactly matched by a 30% increase in the scaling factor in the models, the result will be EXACTLY THE SAME PREDICTIONS!!