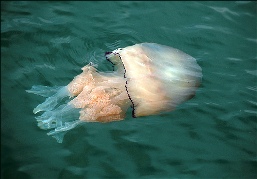 The number of Jellyfish in the Irish Sea are on the rise. In recent years there have been “super blooms” and the media start reporting “scientists” are looking at way of preventing a “jellyfish takeover”. So, what is the suspected cause? Is it overfishing of competitor fish species or is it Global warming?

Scientists suspect global warming could be behind the appearance of massed jellyfish flotillas in the Irish Sea. However, another scientific theory is that over-fishing has radically reduced the numbers of many of the jellyfish’s predators such as trigger fish, sunfish and turtles.
(walesonline.co.uk)

Interesting contrast: “scientists suspect”, which is the usual hallmark of a University press release as opposed to “scientific theory”. But looking to the press release which is the Walesonline source, the link with global isn’t nearly as clear:

“The Jellytrack project will help to address this lack of data and enable the prediction of future changes in the extent and occurrence of jellyfish blooms under different scenarios of global changes.” (Swansea: press release)

OK, the journalist from Walesonline has vastly overstated the global warming link as expressed in the press release, but that’s what the “scientists” said? Or was it? Looking at the project website, another entirely different story begins to emerge:

Jellyfish may be taking over the oceans due to commercial fishing “down the food chain” whereby Man targets the largest fish species in an ecosystem and having decimated that stock then moves on to those fish at the next trophic level down and so on. The end-point of “fishing down the food chain” may be an ocean left with jellyfish. … By studying current jellyfish distribution, movements and connectivity between Irish Sea populations, this work will help us understand if blooms may extend in future beyond current focal areas and engulf more of UK coastal waters and threaten coastal biodiversity.(http://www.jellytrack.co.uk/)

So, here we have it:

From what I can see this is a disgraceful manipulation of the truth an outrage! The scientists didn’t say anything about global warming, it was some press officer (likely with no science qualification) who spun the angle of global “changes” which the media then lapped up and embellished as “global warming” in their own story.

But that doesn’t stop this being another example of the global warming gravy train. Even if the “scientists” involved weren’t responsible, Swansea University’s Department of Biosciences have still tapped into global warming alarmism to help promote themselves and receive a grant for £145,000 for a two- year project. The project Jellytrack seems sensible enough (even if the name is a bit naff):

“The Jellytrack project will help to address this lack of data and enable the prediction of future changes in the extent and occurrence of jellyfish blooms under different scenarios of global changes.”

“Results of the project will improve local, regional and national management of coastal waters through a better understanding of the dynamics of jellyfish blooms and will notably be used to inform management authorities in the UK of the likely threats imposed by blooms of jellyfish in the UK waters.”

So, the research looks good, but the way the scientist’s good name has been tarnished by their own press office is not acceptable. Reading between the lines, it is quite evident how this press release was being spun by the press office and media: Jellyfish eat fish eggs, global warming causes jellyfish, so this vital research sticking tags on jellyfish is critical to mankind because we are all responsible for the huge number of jellyfish marching up the beeches threatening to take over Swansea and annihilating the local stock of fish … or perhaps not.

Why do they do this? Why ruin perfectly good research by linking it to the failed unscientific religion of doomsday global warming? If they stuck to the facts, the story is compelling enough: Overfishing is thought to be causing jellyfish blooms and they need to research to see the implications, particularly as large numbers of jellyfish may put further pressure on fish stocks. Just keep to the facts! Keep up the pressure to do something about the real problems facing us: like controlling who fished in UK waters and enforcing sensible fishing to conserve fish stocks, then there would be enough fish to eat enough jellyfish larvae.